There are several interesting nuances that I’m going to share with you on the White Oak Napa Reserve Blend—a wine that some consider a slight bump up from the winery’s highly rated Alexander Valley Reserve offering. First, it is somewhat of a rarity, as White Oak only produces this wine about three times each decade. The grapes are pulled from a side of Wooden Valley that “collects heat from the Palisades” and they only go to bat for this wine when conditions are ideal. Sounds like a labor but one of love for the growers. 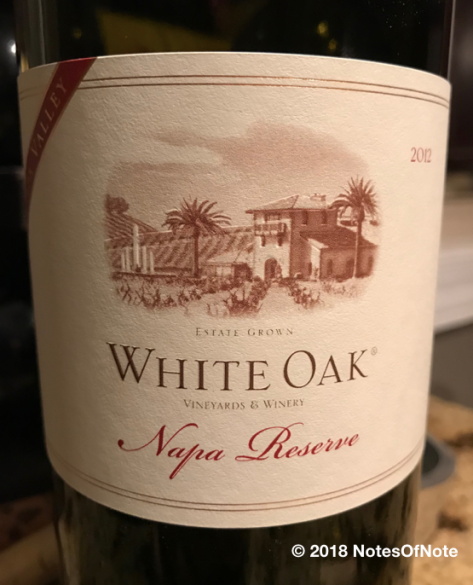 White Oak has about 750 acres around Alexander Valley and they focus on small-quantity releases. This one is a Bordeaux Blend, with a foundation in Cabernet Sauvignon (47%) and Merlot (15%) for sure, but also with a big Petit Verdot (23%) and Malbec (15%) presence as well. At your first sip the Malbec has the biggest bite and announces itself loud and clear; once the wine breathes a bit it takes more of a back seat to the Cab/Merlot blend. This mix is dark, deep purple in the glass and has the Malbec greet your nose. The 2012, crafted by winemaker Bill Parker, is aged 18 months in French Oak.

This is a Vivino purchase and they describe as a “very dark, structured, and aromatic wine that has the shoulders of Howell Mountain but the midsection of Stag’s Leap.”

The 2012 White Oak Vineyards & Winery Cabernet Sauvignon Napa Reserve is a bold red that comes at you in waves. I have one more bottle of this same blend and may decant the next one so that it properly breathes; this one I rushed just a bit. The 2012 White Oak Napa Reserve accompanied chicken and pasta on one evening, and a flatbread pepperoni pizza on the next. The bottle was enjoyable with both, and with better care by me next time I have even higher expectations. Hope this helps you with the same.

My first ever bottle of Silver Oak, one of Alexander Valley’s most well-recognized Cabernets. This one is of the 2012 vintage, and was part of a beautiful day and Easter celebration with my other family (you know who you are!). All afternoon we had great foodstuffs and sampled good grapes–none as delicious as this one.

Thanks for allowing me to join you all and partake in so many good things: food, “Patrick TV”, deck fishing, family, and friendship. Notes on this one will have to come some other time–while the 2012 Silver Oak is exceptional, it pales in comparison to the day we just enjoyed. Looking forward to the next one already.

The Alexander Valley I’ve “visited” on several previous occasions. Among the 30 or so vineyards of this Sonoma County AVA are Clos du Bois, Francis Ford Coppola, Rodney Strong, and Simi Winery–who produced this bold 2012 Cabernet Sauvignon.

Tonight this Cab accompanied black and blue bacon cheeseburgers, tossed beds of greens with mustard, and crispy crowns potatoes. The blackberry flavors, tinged with subtle inferences of spice, were a juicy accent to the burgers. The Simi Winery Cabernet Sauvignon smelled almost tart in the glass, but its actual finish was far gentler and more even than its nose suggested. My wife expressed this idea far more eloquently than I am here but, like this enjoyable bottle of red, her words were fleeting and I have lost them to time and space.

Here’s how the vineyard conveyed: “Balanced flavors of red and black fruits, smooth tannins, and soft spice give way to a velvety finish.” They used fruit from Los Amigos and Red Fan, and other Alexander Valley Vineyards (e.g., Encinos, Big River, Hoot Owl Creek, and Belle Terre) to develop the final flavors in this Cabernet, which is actually a red blend of 90% Cabernet Sauvignon, 7% Merlot, 1% Petit Verdot, 1% Cabernet Franc, and 1% Malbec. (It’s the Malbec and Verdot that convey the spices, if you’re curious…)

Last couple things: the grapes fermented 32 days in stainless steel (on the skins) and ultimately aged 16 months in small oak barrels–releasing in June of 2014. It’s a good value for the price, and the 2012 Simi Cab should be readily available in your local wine store. I’d pick up another and recommend you do the same.

Big bunches of berry smells jump right out from the 2012 vintage of the Layer Cake Cabernet Sauvignon–not bad for some on-the-go wine. Picked this bottle in part because of some decent history with Layer Cake (which I somehow cannot find right now, despite distinct memories of drinking it in our rental house) and in part because its screw top is conducive to easy access sans corkscrew. So what of the taste, say you?

It’s juicy, it’s luscious, and there’s plenty of value here. Some of the depth (the chocolate?) that I recall from Carnivores past and other Cabs is in play here, as are some char-like flavors. No meal with this beverage; just some unwinding for a soul sorely in need of some. I’m glad I picked the 2012 Layer Cake Cabernet Sauvignon instead of their Malbec, which was close by but less of a draw on this occasion.

Is it odd to say I liked the label? Its cake is not overdone but nevertheless memorable. I’m not talking about the font (which is sharp in and of itself) or the appearance of the label as much as I am its texture. The 2012 has a feel to it that’s almost embossed; some cool ink work that I admire from a production standpoint.

The 2012 Layer Cake Cabernet Sauvignon hails from a California vineyard that has a clever back story. The grapes come from the Alexander Valley, and there is good reading all over the web on the particular minerals and terroir of this AVA. You should take a moment and Google the region–maybe even while enjoying a glass of this fruity red.

Delicious evening cocktail, the Votre Sante. This delicious Pinot Noir kept me company during a busy week of NJ travel; it greeted me throughout after the day’s toils and was great on each occasion. I had to look up (guess I’m far from worldly) the name–it’s the toast one traditionally offers in France when raising a glass.

And raise a glass I did, on Sunday evening, on St. Patrick’s Day, last night, and again this evening. The 2013 is excellent; it’s a bit darker than my favorite Buena Vista Pinots, and it throw off great smells of raspberry and cherry…with just a hint of spice that I’d attribute more to a Cabernet Sauvignon than a Pinot Noir. Yet it was still very light and offered an easy finish. I was immediately thrilled my wife had selected it–thanks love.

I’ve recently taken to carrying a corkscrew on my travels, and the extra attention you get in an airline security line is worth it when a drink like the 2013 Votre Sante awaits at your final destination. I was reading about the 2012 Bordeaux crop on my flight into the tri-state region so the Pinot Noir was a course correction of sorts but a really enjoyable one.

If you’re interested in further tasting notes from the winemaker, simply click here for details. I’m a big fan of Coppola’s movies (hard to pick a favorite…but I’ll go with The Godfather: Part II by a slim margin over Part I and his take on Dracula) and, though this is my first wine of his, I’m going to be a fast fan of his grapes too. Votre sante to you all as well.

Hard to know how to title this wine–the bottle reads simply Baby Blue but the winemaker’s website calls it Baby Blue Cabernet.  Or Baby Blue Estate Red Blend.  Whatever it’s called, it is fantastic.  My wife picked out this crazy winner and gifted it to me for my 40th birthday.  It was part of a great weekend, and we polished it off on Sunday night with a perfectly grilled steak, some delicious tater tot crowns, and grilled asparagus.  Perfect pairing, in all the ways that matter to me–obvious and subtle both.

At the moment, red blends are very much vogue for this gent.  Here’s the makeup of the Blue Rock:

The winemaker remarks further, “The wine spent 16 months in French Oak (once used) and has been bottled unfined. As a result, Baby Blue is delicious on release and is intended for mid-term cellaring.”  Fans of this blog know that’s a bunch of high-falutin’ language but in the end it means one important thing–the wine is great.  I’m ready for my next glass already.