When Notes was first launched it was inconceivable to think that it would grow to this volume over time, or capture so many interesting bottles and tasting experiences. Though the site once combined both “wine trail” and “tasting experiences”, given that this fan has enjoyed both in abundance it seems more appropriate to separate them into excursions and in-store events. Voila…enjoy.

1. Blind Taste Testing the Release of the 2014 Caymus Cabernet Sauvignon (South Park, Charlotte, NC): June 11, 2016.
The opportunity to gauge my experience and fandom of California Cabernet as well as the critically acclaimed Caymus Cab brought me to Winestore on a blazingly hot Carolina day for a double-blind sampling. Three clear highlights were the 2013 Penfolds Bin 389 (great, savory spice blending Cabernet and Shiraz), the 2014 Willowlake Napa Cab (classic California Cab, with lots of layers and rich dark fruits), and of course the 2014 Caymus and the big explosion of fruit that is a hallmark of Wagner family wines.

2. Taste Testing Orin Swift Wines (South Park, Charlotte, NC): July 8, 2017.
A simple email from my favorite wine store prompted me to swing into the shop this

weekend to taste a series of Swift’s best. Shown here are the Machete, the Palermo, the Cuttings, and I sampled the Abstract, the Prisoner, and the Papillon, too. I was immediately a Dave Phinney fan and snatched up a few new favorites. This brief stop-over changed the wines I sought for the rest of 2017 and set me on a new course for 2018.

3. Fleming’s A Taste of Summer (Charlotte, NC): August 20, 2016.
This one is a good memory, one I got to enjoy with my brother who was in town visiting. We took in a ballgame (great environment!) and also this tasting event at Fleming’s. They had four different stations setup through the restaurant, offering a worldwide perspective on many of the bottles that make up their wine list. We hung out and mingled with the folks sharing information and in the overall experience; favorites from that day for me included a Canali Pinot Chardonnay, a 2012 Liberated sample, the 2014 Round Pond (great peppery/blackberry mix), a nice Norman red, the 2014 Yardstick, and the Gundlach Bundschu Mountain Cuvee that I’ve had a few times since here. They were not all amazing, but the adventure definitely was. Glad we did this together!

4. Blind Taste Testing for the 2013 Silver Oak Cabernet Sauvignon (South Park, Charlotte, NC): September 23, 2017.
I’ve sampled Silver Oak one time previously, celebrating a great occasion, and I thought I would be able to discern its big flavor even if masked by a thin veneer of aluminum foil. The big Napa Cab and its $69 price tag were matched up with other wines that ranged from $9.99 to $29.99 and included gems like the 2015 BR Cohn Silver Label Cabernet, the 2014 Beringer Quantum (which I ultimately mistook for the Silver Oak), and the 2014 Gun Bun Mountain Cuvee.  Although I did not pick out the Silver Oak, I did leave with a new respect (and bottle!) for the 2014 Treana Red. To me it was like a Syrah or a Michael David red blend, and it was the #1 vote getter among all who tasted at this event. 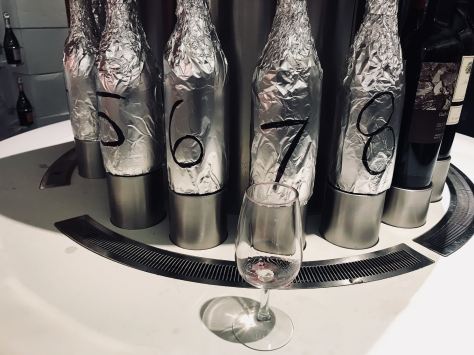 Having never tried the Belle Gloss in the past I was basing my search for it, among the masked samples, on my overall feel for Pinot and, perhaps just bit, on its reputation as a market favorite. First odds, then even numbers…up and down the aisle trying to identify the Pinot based on its blackberry, cherry, and hint of vanilla notes. Gauging from color was a part of the task, too. Several options were very dry and could be immediately eliminated. After an hour I thought #8 (which turned out to be the 2015 Chehalem 3 Vineyard Pinot Noir) was the winner but was mistaken again. For those of you following these blind tests, you’ll note I am 0-for thus far but did select a pretty close option this time out. Other servings included a delicious berry-filled 2016 Willowlake Pinot Noir ($24.99), a 2015 Morgan “Double L” Pinot Noir ($29.99) that tasted like the Leese-Fitch to me, and Winestore favorite the 2016 Block & Tackle Pinot Noir.

Interesting concept – my favorite wine retailer loaded up their tasting banks with special reserve and second tier wines from some of the industry’s most-recognized winemakers and gave visitors an opportunity to taste test the biggest price tag wines versus “regular” offerings. Iconic industry heavyweights Caymus, Goldschmidt, and Pahlmeyer were represented in the samplings, as was Jeff Runquist–certainly a favorite of this wine afficianado (you can find Notes reviews of his wines here and through related links). Does the Caymus Special Selection Cabernet Sauvignon really separate itself from their Napa Valley Cab? Does the $110+ Goldschmidt Cabernet Sauvignon Game Ranch Plus really outpace their Hilary ($35) by a notable distance? And how does the Runquist Petite compare vs. the 1448? The promotion was interesting and I found that most of the time the differences were extremely subtle, even for a gent like me who has sampled his share of wines and blends from this exact region. Case in point–I left carrying not one of the special reserves but the second tier options. Great bang for the bucks and grateful to spend a memorable day on this experience.

Very much in the spirit of last year’s Flagships vs. Second Tiers, this tasting pitted two wineries (Far Niente and Plumpjack) and their varying takes on the Cabernet Sauvignon varietal. I’ve yet to have the pleasure of visiting their California estates (hello, bucket list?) but relished the opportunity to sample their take on my favorite grape. Thus, I tasted here the 2016 Far Niente Oakville Cabernet, 2014 Nickel & Nickel Quarry Vineyard Cabernet, and the 2016 Bella Union Cabernet. Though the Far Niente is the priciest of these wines, I found my preferences rested instead with the Nickel & Nickel offering. Both are single vineyard cabs, and at nearly $100 bottle the Quarry is not exactly a wine you can drink daily. The Bella Union was really pleasant too, and winestore had this Cabernet at about half the price I saw online and in other wine stores over the last two weeks. Good tasting experience, and great knowledgeable staff on hand as always.

I’ve been participating in these tasting events for four years now, and I have YET to identify the white whale in any of the blind testings. I brought in reinforcements for this one, with Cara riding shotgun to see if we could pick out the Silver Oak from among the eight bottles offered to us on the winestore machines. Said in short? We couldn’t. Or didn’t. Record intact.

Me? I picked a 2018 Cab Sauv from France, the Mazet de la Palombiere (bought one!) because I loved its overall nose and its layered feel. (The color and character just seemed right.) Cara picked a much pricier Cabernet as her guess, but not the Alexander Valley Cab. We did well in differentiating the red blends (including a couple interesting tooth-stainers) from the Cabs, and definitely shared kind remarks on the Silver Oak, but we did not pick the right wine.  That’s my favorite part of this recurring challenge–the carrot that’s always out there in front of us. One day I’ll get my choppers into this bottle but in the meantime am enjoying the quest. And the company along for the journey 🙂