Jonesing for a red alternative this weekend, I grabbed this Malbec from a local grocery store and hoped for a good tasting experience. I’ve been doing more wine reading as of late and, while I couldn’t recall if the Trivento was included in any ‘must try’ recommendations, I know that Argentinian Malbec has been recognized by some wine aficionados as a below-the-radar find. 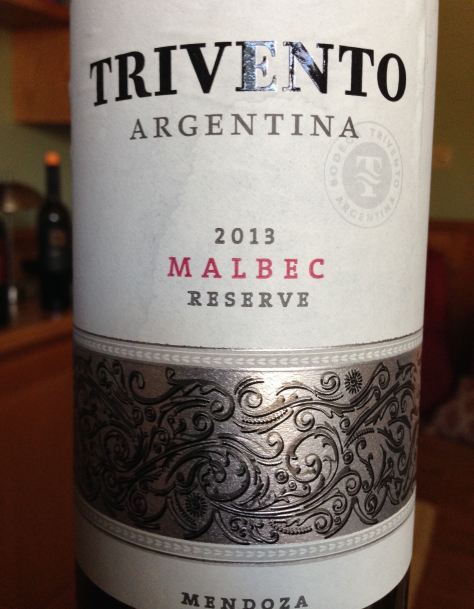 And so, from the world’s fifth-largest wine producer Argentina (up to $1 billion in 2014 exports from $5 million just 20 years ago) comes the Trivento. According to the winemaker, this wine gets its name from the Polar, Zonda, and Sudestada winds and owes its fortunes to the Eolo, the God of the Winds who commands the winds over the Mendoza region from which Trivento originates. Now that’s a whole lot of cool mythos, and the Trivento almost foots the bill. It’s a plummy red wine, a medium-bodied dry red that has a little bit of oaky vanilla woven throughout its core.

Our foodstuffs on this Sunday evening included a pork loin, savory and succulent, and a light green salad. Throw in some mashed potatoes too with the 2013 Trivento Reserve and you’ve got a meal.

Argentina boasts less than 5% market share today and the Trivento is a safe, right-down-the-middle of the plate groove through the strike zone. Not too sharp, and plenty safe. I liked fine enough but don’t really need to give it another go.

We’ll call this a “birthday wine”, because we opened while celebrating a milestone for Ma.  I’ve seen it shelved and/or displayed in NJ wine stores and must be a relatively mass-produced Argentinian red because it was all over Rochester too.  The Malbec followed a Tormaresca that we had gifted (and written about) previously, and that’s one of the fun things about having more people enjoying a bottle together–with the portions divided, you get to open more bottles and do more sampling at a given sitting.  In any case, we uncorked the Gascon Malbec 2009 to accompany an Asian green salad, grilled asparagus, twice-baked potatoes, and perfectly cooked Wegman’s steaks.  It must have worked well in this capacity, because it was long gone by the time we got around to some fantastic desserts.

Here’s the usual run-down from the winemaker: “Don Miguel Gascón Malbec is a full-bodied wine with a deep violet color, showcasing flavors and aromas of blackberry, blueberry, plum, dark cherry, and a hint of mocha. The wine is elegant and rich in texture, with soft, round tannins and a long velvety finish.”

Apparently the growing season in 2009 had some crazy temperatures that resulted in variations to the grapes–their thickness, acidity, vibrancy, freshness, concentration–a host of factors far beyond my taste.  I was just glad it was such a welcome addition to the glad event.

Have wanted to revisit a Malbec for some time and the 2007 Petizos was good company this evening.  This nice Argentian red is named for a breed of South American horse that is descended from Persian warrior horses now devoted to the sport of polo (the term “pulu”, the Tibetin word for ball, is part of the word’s origin).  I’m sure it is not really intended to accompany shellfish–we did have crabcakes, scallops, and shrimp with the Petizos (along with some spicy chicken strips and baked macaroni and cheese)–but this grape did work better than expected.  This rich, fragrant red wine better accompanied the pepperoni pizza we had too while wishing our friend and neighbor a happy birthday.

The red underpinnings of the Petizos made themselves known and were very enjoyable to this casual consumer.  A portion of the proceeds from this Malbec will help make a “better life for animals near and far”.  Not the reason I’d flagged this wine originally, but a welcome benefit nonetheless.  Looking forward to the next bottle soon!

This Argentinian Malbec we’ve sampled once or twice previously (albeit before starting this blog), an affordable red from South America’s Mendoza region. It definitely has a whiff of berries and “deep red” about it. I’m reserving some additional notes for the next tasting, but this first bottle we split over two evenings–the second one with dinner. We had this Malbec with a delicious apple blue cheese salad and perfectly readied pork chops.

This Argentinian malbec we recently enjoyed…like many others, as a celebration for making it through our respective work weeks.  I do not recall what food accompanied this delicious treat, but know this bottle we would gladly do again–soon!  Definitely lighter than a cab or a merlot, and slightly weightier than a pinot noir.

This malbec we had over the course of two nights.  We opened this originally to enjoy with a pork loin–really perfectly cooked–and a fresh salad of mixed greens, sliced apples, and crumbled blue cheese.  The food was great but the wine needed more time to breathe.  Thus, we pulled it again a night later, after working through appetizers and a bottle of Mark West pinot noir, and finished the malbec with ravioli.  We like a malbec and thus had to give it a try but probably would put others on the list ahead of this one.