This is the one they call the “kitchen sink” wine, the red blend conceived by Jeff Runquist.  The winemaker has been at it since 1982 and built his craft over time at the Napa Valley Cooperative Winery, J. Lohr, and others until he released 700 cases of zinfandel under his own label in 1997. In spring 2008 Runquist opened a tasting room in Amador County has been handling the majority of his production from that location since that time. 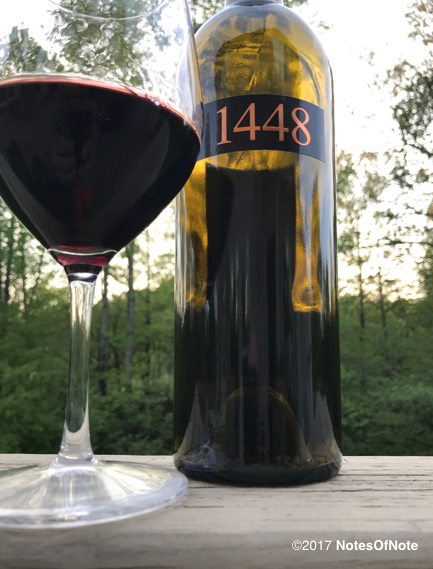 And how does that production rate? Pretty well, in the opinion of this fan. My first exposure to the 1448 red blend was nearly two years ago, and in that tasting you’ll see some background on Amador County as well as the pairing (i.e., grilled chicken with orzo arugula salad and roasted red peppers). This time I had it with a garden salad (always with freshly ground black pepper), a grilled New York Strip, and roasted Yukon potatoes.

The 1448 pairs well with both the chicken and the steak; its inky red nearly looks like blood when you pour in the glass (see accompanying photo) and it is absolutely crammed with flavor. I note some similarities to other red blends such as the Michael David Petite Petit and the Conundrum Red (there are several tastings of both in Notes if you’re so inclined), and in the 1448 you get a whiff of gentle smoke or chocolate too. It’s really berry-rich, and very easy to drink. Less tannins than a Cabernet if that appeals to you.

This follows on the heels of a great 2015 Petite Syrah from Runquist that I experienced last week as part of a birthday celebration, and if you can have one of the vineyard’s bottles every weekend like this then the universe is being pretty kind to you. Enjoy…and thanks for reading.