This 2013 Simi Chardonnay, originating from Sonoma, California, is more pear and citrus than it is buttery. Most Chardonnay that I have is more of the latter…but I think that’s perhaps because I rarely buy white myself, except in wine shipments from Buena Vista. Whites are more the purview of my lovely bride. 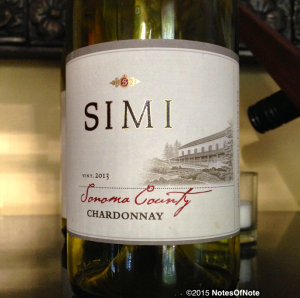 That being said, the Simi went along with a simple Italian dinner. We had penne pasta, a little bit of ground beef, and a couple of forkfuls of sausage mixed in as well. The beef (we reheated) was only okay, but the sausage kicked a little bit of tang into the equation to good effect.

This was a weeknight meal and, though it was ultimately pretty tasty, this food was more about function than aesthetics. That’s kind of how I would describe the 2013 Simi Chardonnay as well.