This was a multiple­-night Chardonnay, and that usually means one of two things: 1) either the white didn’t have enough time to breathe, or 2) the accompanying food disappeared faster than the vino. In our house, whites are consumed infrequently and even less often once the fish or chicken is gone. 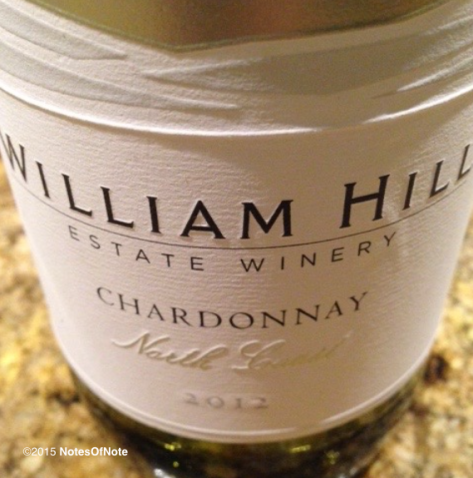 The William Hill North Coast has good branding, and a label that is not unlike a Mondavi. The embossing is a nice touch too, but I didn’t think this white quite lived up to this appearance. It was not sweet (which gets no love whatsoever in Notes) at all, and had some light floral and citrus (definitely pear) notes to it­­–but so do practically all whites. So how did this 2012 differentiate itself?

Said plainly, it really didn’t. I have yet to research this vintage of the William Hill, and I don’t know its cooperage­­, but I’m betting this was not aged in oak. I’m thinking stainless steel instead. Some of the warmth (what I often hear described as “buttery”) I equate with an oak barrel was not present here. This is not to say it was metallic tasting, but it was just uneven.*

Enjoyed the chance to try something new here, in the 2012 William Hill North Coast Chardonnay, but I am satisfied and file now under “been there, done that.”

*Postscript. The winemaker described, “This well-balanced wine has a robust fruit finish.” And they also state that a “portion” of this wine is aged in stainless steel at a maximum temperature of 62°F and the rest fermented in barrels at “an ambient cellar temperature of approximately 65°F.” Bingo!