Saturday night with old friends and new wines, notably the 2013 Sugarloaf Mountain Vineyard Proprietary Red from Bevan Cellars, and a 2016 bottle of Cab from Daou. Our evening didn’t finish with these two bottles, but rather kicked it off as we enjoyed a fun dinner at the Echo & Rig Butcher and Steakhouse in Las Vegas. The Sugarloaf came with the highest reviews (and hefty price tag–thanks Tony for this treat!) and was batting leadoff. It’s a bold red blend, and even on the cork you could smell its pungent mix of dark fruit. The Sugarloaf is fantastic, a combination of dark plum and blackberry notes, with just a hint of spices below the surface. The wine is composed of Cabernet Franc, Cabernet Sauvignon, and Merlot grapes. This Bevan Cellars offering pours so purple that it’s almost miscast as a ‘red’ wine. We did let it breathe, but honestly just for a few moments and swirls. With four of us splitting the Proprietary Red there was just enough for a first glass, and course it left us wanting more. I know the winery doesn’t do public tastings so you’ll have to just trust me (which is fair…I do taste a lot of California red for a ‘regular’ dude) and sample wherever you can–or just go buy one. 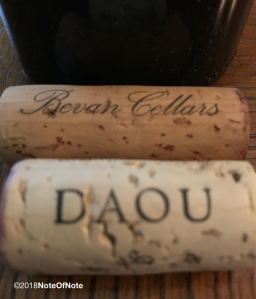 Next up was the 2016 Daou Cabernet Sauvignon from Paso Robles, a bottle that similarly earned raves from our foursome. It may have cost a fraction of the top-shelf Sugarloaf, but its excellence was right on par with the more expensive Napa blend. Whereas the 2013 primarily accompanied appetizers, the Daou we had with our entrees. It was bold and fruity, packed with dark cherry notes and a little bit of that earthy spice that I so enjoy among California Cab. Great mouthfeel overall!

I went with a filet mignon this evening, and we did a bunch of family-style sides at this steakhouse. The staff was great, the meal was exceptional, and the friendship even better than that. Forgive me for having less information on the wine this time…I was too busy enjoying the good company. Lots of smiles in our bunch on this evening, which we would soon extend to a wine bar just up the street for after dinner drinks. Raising a glass to all that made this night so enjoyable!