Opened this Leese-Fitch zinfandel earlier in the week but finished it off this evening to complement a Blue Apron meal that consisted of sautéed beef and roasted eggplant. I had selected the 2015 Zinfandel (and a Cab too) from Winestore not from the reputation of the winemaker, which was new to me, but rather the grape and the price point. It’s got great value at $10 and I would highly recommend if price is a driving force in your wine selection. 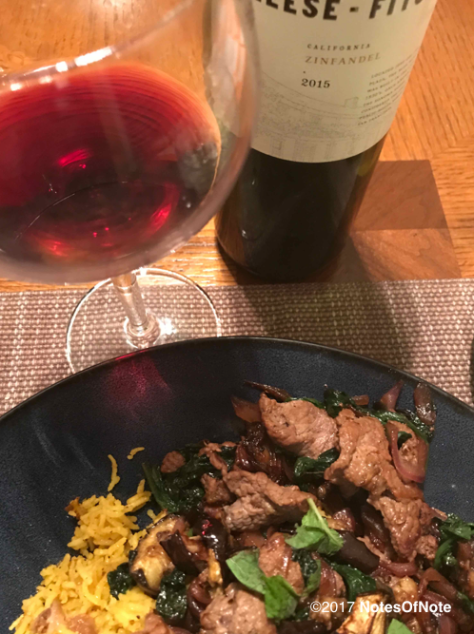 Sneaky by the Leese-Fitch team is the 18% Petite Sirah that they added to the wine, and even as I write here I’m not sure if I’ll classify this bottle as a zin or a red blend. Suffice it to say you’ll drink with a smile regardless, so let us not split hairs. It pours dark purple and has notes of blackberry and spices (thanks to the PS) in your glass, and it has that plus tastes of cherry and dark berries on the palate. This is one of those times you should drink not with some preconceived notion of taste, i.e., governed by price, but rather just enjoy for what it is–fun, easy-drinking zinfandel.

Mine accompanied a Middle East-influenced beef dish, served with roasted eggplant and spinach on a bed of rice that was kicked up thanks to an “Afghan-style” spice blend*. A creamy cucumber salad on the side was cool and refreshing, offsetting the spices of the main dish. I nearly blew the timing of the meal as I worked to free the eggplant from the sheet pan but if you look at the image here you’ll see I did recover in time (and yes ate ‘both’ portions). The 2015 zinfandel from Leese-Fitch was great with this meal, its earthy qualities calming to the spices too. Since I had opened it earlier in the week, the combo was more happy accident than intention but still effective. Thanks for reading and have a great day.