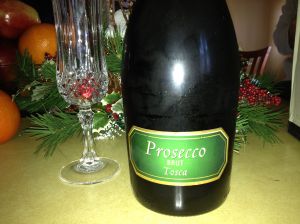 While shopping for holiday wines at our local Bottle King, I had an idea that a prosecco would be a fun buy…possibly as an after dinner drink but just perhaps to jumpstart the day in a mimosa or two.  This one is from the Prosecco de Valdobbiadene region, Veneto, Italy and, according to Wine Buyer, is supposed to be “…fresh peaches and apricots with a hint of nuts and fruit on the nose, clean and refreshing.”

Historically speaking, Prosecco is the name of the wine, the grape from which it is made,  and the town where the grape is believed to have originated.  The wine has a long pedigree, stretching back to the Roman Empire, and was our breakfast treat.  We did ultimately rock the mimosas, having them together with our traditional egg casserole, slices of cinnamon roll, fresh berries, and lemon scones.  Each of us poured his or her Prosecco to taste and it was a fun way to begin celebrating Christmas.