First wine of the new year, and one that had always caught my eye while looking for new ideas…particularly California red ideas, which always do well in our house.  I started this bottle earlier in the weekend and was surprised at how tart it was initially.  Definitely did not give it enough time to settle into itself when I had the first glass, which was so tart that I almost put it down and switched over to a beer instead.  Let’s say that false start doesn’t show the true colors of the Apothic Red. 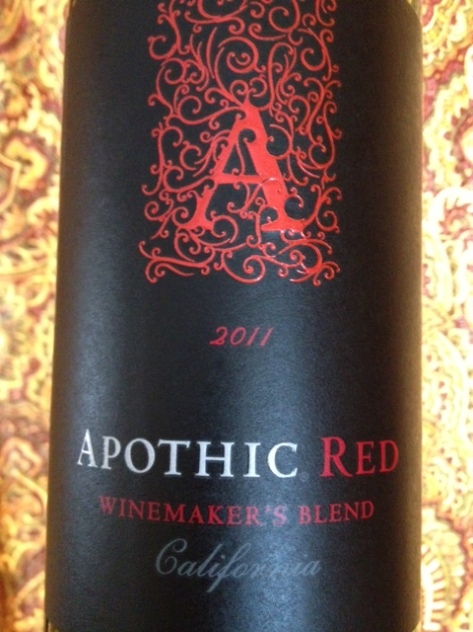 When I gave it another shot on Sunday afternoon, the Apothic came full circle.  I raised an eyebrow and gave it an approving nod.  I didn’t know the breakdown of the blend, or what grapes ultimately make the cut in this dark ruby red, but it had a lovely, deep mouthy feel and engendered a big smile.

Curious, I checked its profile with the winemaker and learned they worked to bring in red jam flavors inclusive of Syrah, Zin, Merlot, and Cabernet Sauvignon grapes, and some undertones of mocha and vanilla.  I could definitely detect both those spices amid all the fruity reds, and preferred the mocha to the vanilla for this bottle.

I liked it for sure but, given all the wonderful reds there are out there, and even in our rack at the moment, I think I got my initial fill of the Apothic for now.  Maybe more later?